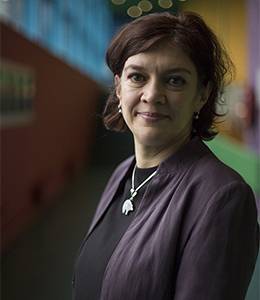 "Online education gives students the freedom towards autonomy and innovation; to teachers, it gives renewed freedom for getting beyond the borders of what they have to teach."

Marilena Bos-Pavel received in 1990 Engineering Degrees in Aeronautics from The Faculty of Aerospace Engineering, Bucharest Polytechnic University, Bucharest, Romania. After graduation she joined the National Institute of Aviation in Bucharest, Romania, where she worked as a research engineer in the field of rotary wings.

In 1995, she came to The Faculty of Aerospace Engineering, Delft University of Technology, with a Nuffic scholarship in research, joining the Department of Flight Mechanics and Propulsion. From 1996 to 2001, she worked as a PhD student in the field of rotary wings modelling, specializing in the area of modelling and simulating the dynamics of rotary wing devices. In 2001, she was a visiting research associate at the University of Liverpool in the Group of Flight Science and Technology, having been appointed as Honorary Research Associate. From 2001 to the present, she has worked as Assistant Professor at the Faculty of Aerospace Engineering, Delft University.

Her interests include rotary wings flight mechanics, handling qualities, design and aeroelasticity. She is a Member of the American Helicopter Society AHS.

Assistant professor at the Department of Control & Simulation, Faculty of Aerospace Engineering, Delft University of Technology

<p>An introduction to the field of rotorcraft, covering helicopters and hybrid aircraft-rotorcraft configurations.</p>

<p>Rather like solving a tough mystery, this course is a "Howdunit" - tracking down and applying the equations of mot...